At the beginning of April, the German Newbie-Team had this year’s first steering group meeting. What was planned to be a nice gathering in the vineyard of Weingut Walz with Newbie and BDL vice-president, Mara Walz, turned out to be a video conference after all (#stayathome). After a short overview on the overall as well as the national project’s status quo, the possibilities and necessities for a German Newbie-toolbox were discussed. This manifold topic includes a wide variety of aspects that must be kept in mind, when developing something useful for new entrants. One main issue, that needs to be addressed especially in Germany, is its federal structure with all the diverse preconditions (e.g. different legal situations and advisory service offers). Other aspects concern the diversity of the topics that can be represented in such a collection of tools. They may start at an interpersonal level and concern, e.g. the relationship between the farmer that gives away the farm and the (farm) successor(s), as well as concerning the relationships between landowners and tenants. The materials can also relate to specific agricultural knowledge and training, for example in the field of animal husbandry or horticulture. Other subjects can tackle funding and financing knowledge or business management decisions. Legal advice is also an aspect that needs attention, e.g. in the field of inheritance law. In the German context, a very important requirement is the possibility to access the information in German language. Other affairs that need to be focused on by the Newbie research team is the up-to-dateness of the information/tools and the ownership of the national toolboxes.

Moreover, the steering group selected this year’s Newbie-Award winner for Germany. There were a couple of very interesting business models that applied for the award, including e.g. a farm kindergarten or a regional delivery service, but in the end only one business fully convinced the jury. The winner will be officially announced when the award is be presented later this year at an f3 (food farm future) “Scheunengespräch”-event.

The next German steering group meeting will be held in December and have practical newbie topics on the agenda as well as the next European Newbie Conference on the 20th of January 2020 in Berlin. 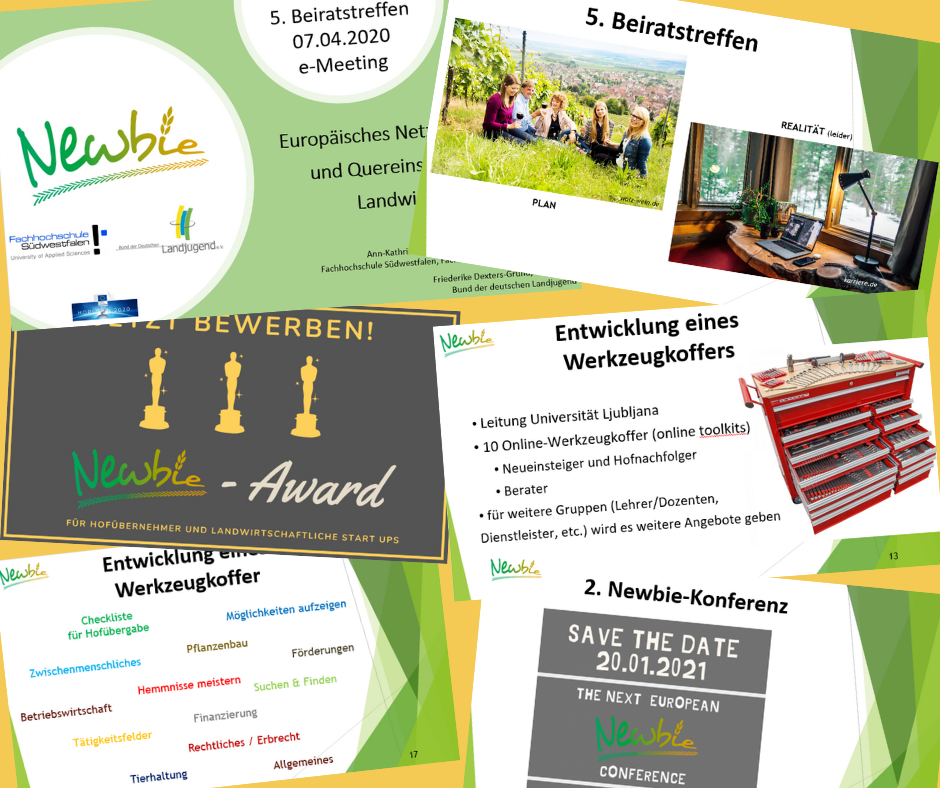