On the last day of the three-day program in Montpellier, the Newbie consortium partners and farmers visited four inspiring regional farms. We started the day by visiting the farm incubator “Domaine de Viviers”, where farmers can learn how to set up their farming activities. Then, we were welcomed in the vineyards of “Domaine de Favas”. In the afternoon, we visited the biodynamic farm “Basse-cour et Courtois”. We ended the day with a visit to the olive groves and pomegranate fields of Mas de la Victoire.

Terracoopa is an agricultural cooperative that serves as a farm incubator for spiring farmers. The cooperative supports farmers in setting up their farm as well as in the development of new activities. They do this by providing legal accommodation and pooling knowledge and means of production. Terracoopa welcomes 70 entrepreneurs from different backgrounds: 20 farmers, 30 landscape gardeners, 10 food processors and 10 agricultural and environmental advisors or consultants. You can read more about them on their website. 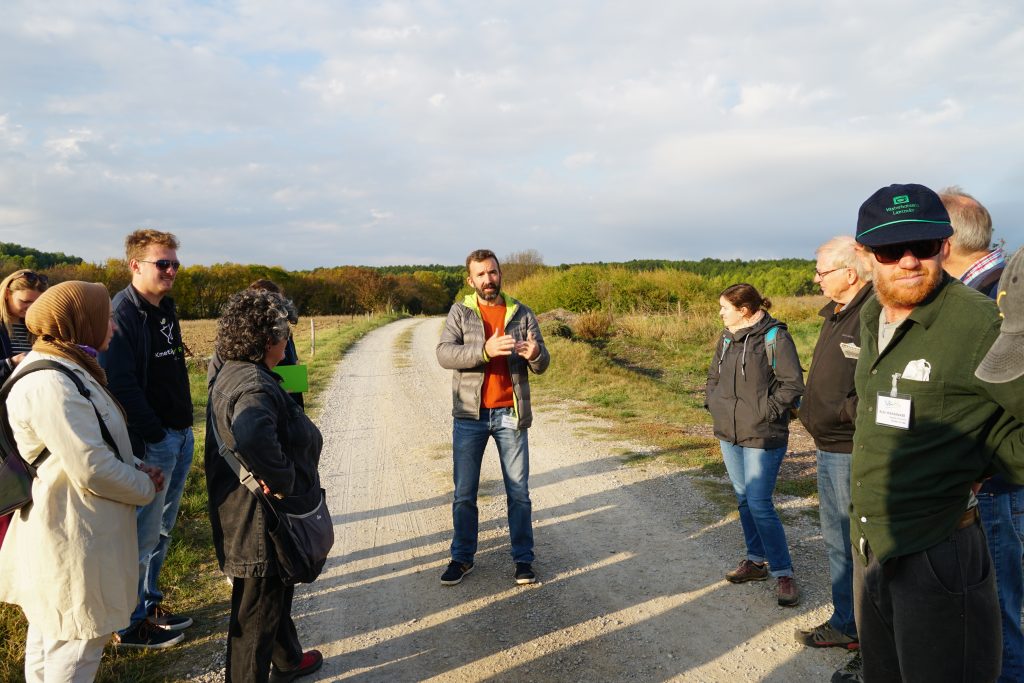 As part of the Terracoopa cooperative, Domaine de Viviers in Clapiers is hosting 8 farmers on an area of 10 hectares. Since 2011, Domaine de Viviers rents this land from Montpellier Metropole. Aspiring farmers can test various activities, including flower cultivation, market gardening, cultivation of aromatic or medicinal plants, permaculture and/or vegetables. They pay only €1500 per year per hectare and a 10% fee on all sold products. Cooperants receive a variety of benefits: land, a greenhouse, a large marketing network, a management advisor, a technical advisor and all tools and equipment. Participants receive an annual contract that can be renewed twice. After three years, farmers have gathered enough experience to decide whether they are ready to start their own business. 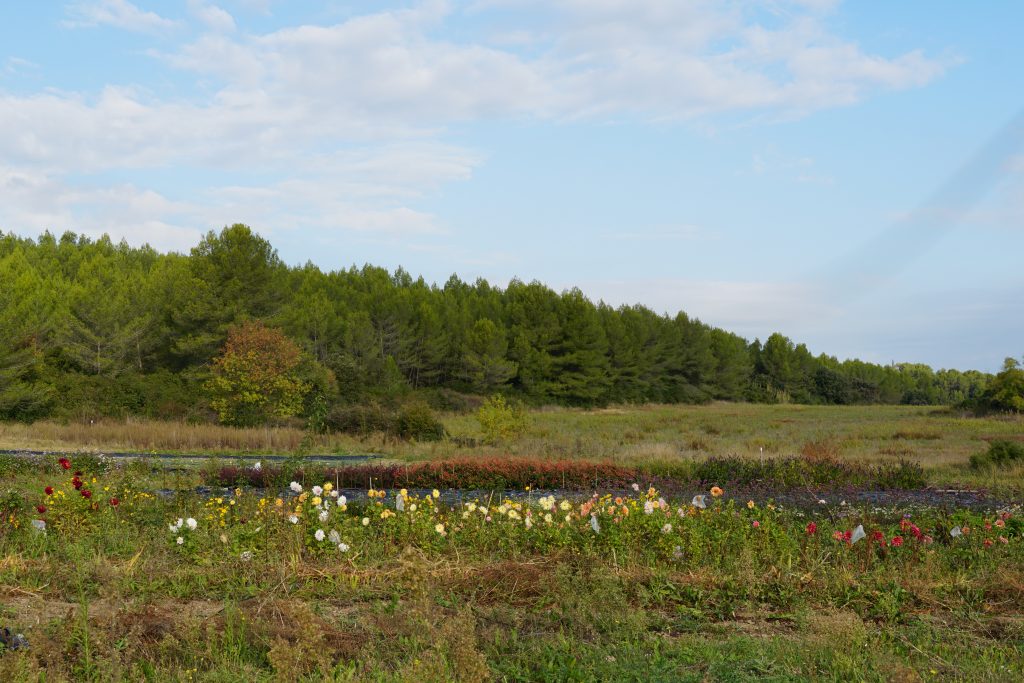 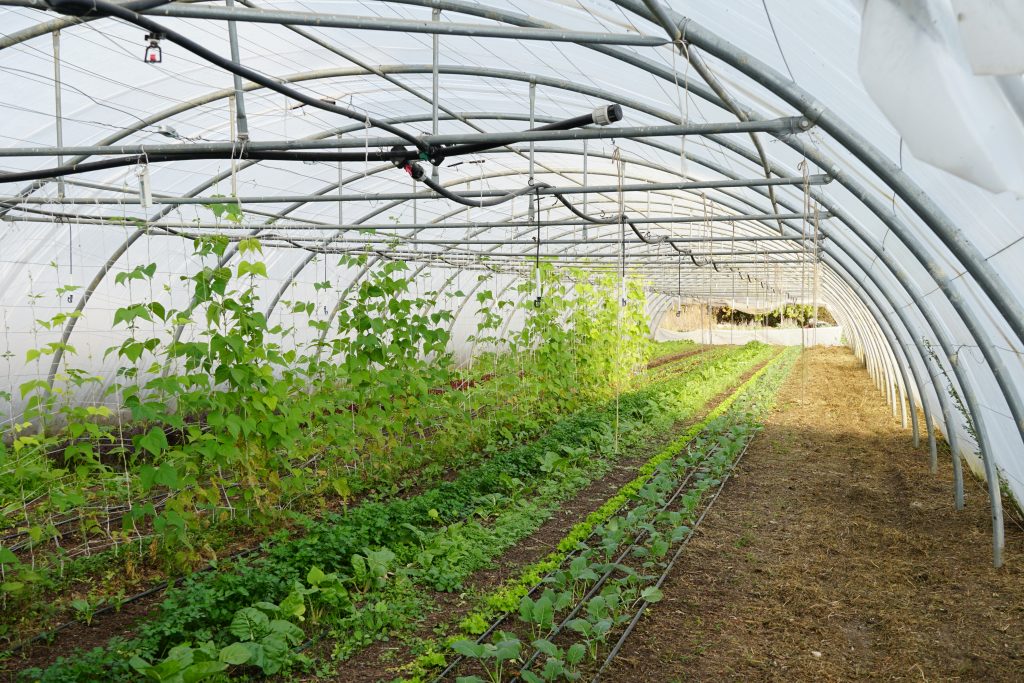 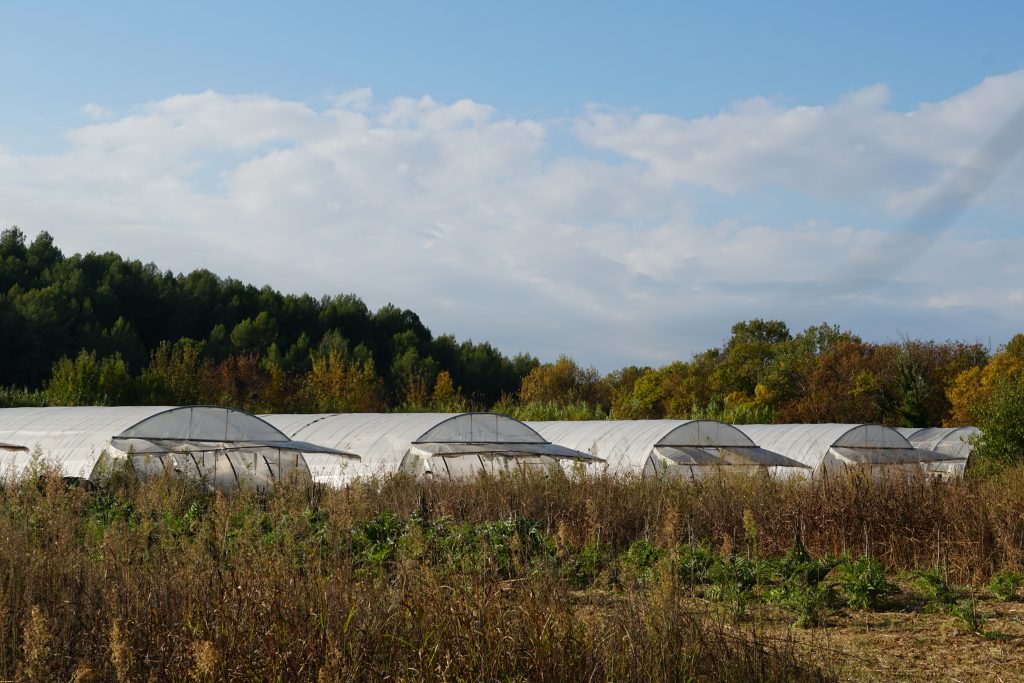 Domaine de Favas is a winery located in the municipality of Favas, north of Montpellier. The winery is a family business that has been active for 22 generations. Today, it is ran by Samuel Masse, who took over the farm from his grandparents in 2012. 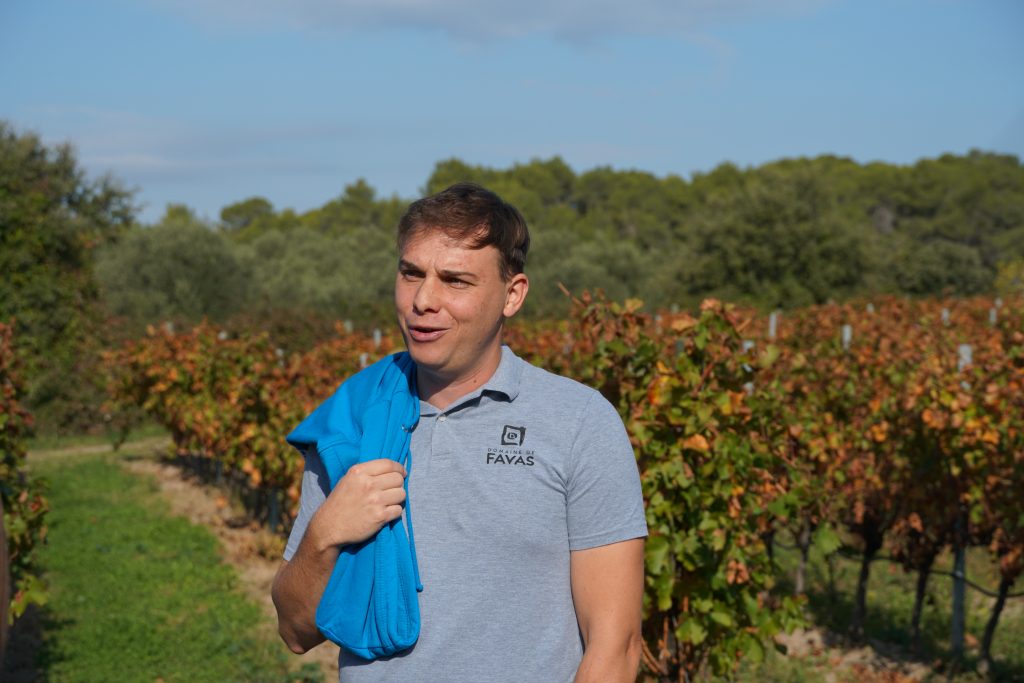 The domain consists of 20 hectares of vineyards and 20 hectares of pine and scrubland. The vineyard has always been an important part of the landscape in this area. However, it has not always been the only activity at Domaine de Favas: in the past, the family also raised sheep and silkworms and cultivated olives. 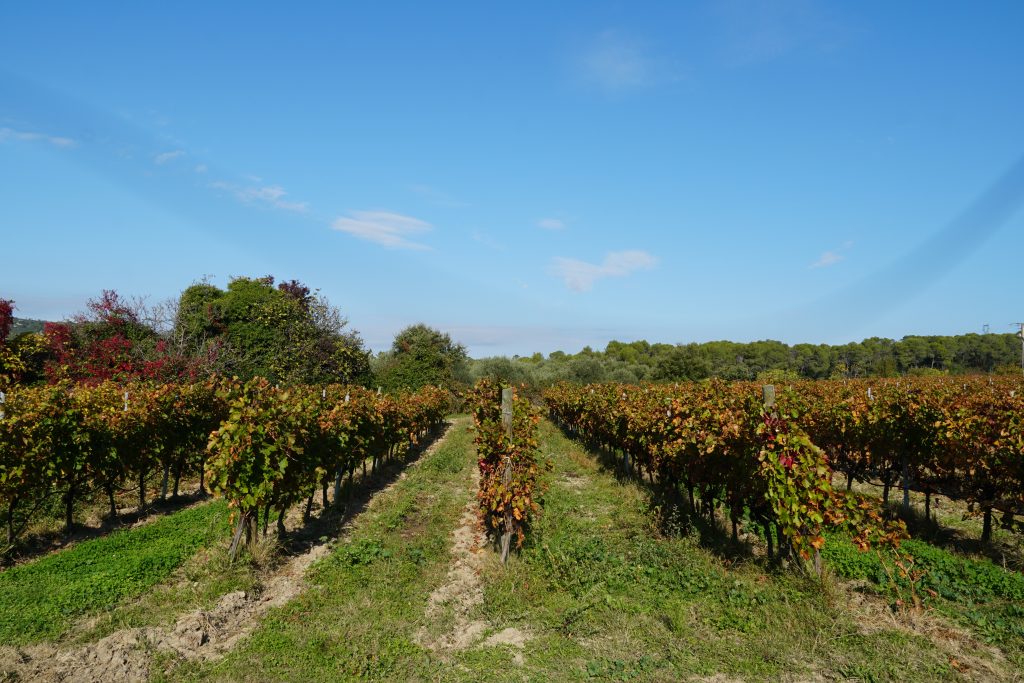 In 2018, Samuel and his brother invested in a grape processing and winemaking facility on the farm. Since then, the three wines that made up the initial product range of Domaine de Favas (i.e. white, red and rosé wine), have been produced in the old cellar. In 2020, the brothers extended their production to include Cuvée wines called “La Réale” and “Origine”. These wines are made from grapes aged in French barrels and handmade terracotta jars. The five wines produced at Domaine de Favas are blends of any of the over 40 cultivated varieties. Today, 15% of the grapes are processed on the estate, bottled and sold on the farm at Favas. This results in a production of approximately 9000 bottles of wine. All other grapes are processed by a nearby cooperative. The family joined this cooperative in 1949, when Samuel’s grandparents stopped processing on their farm. 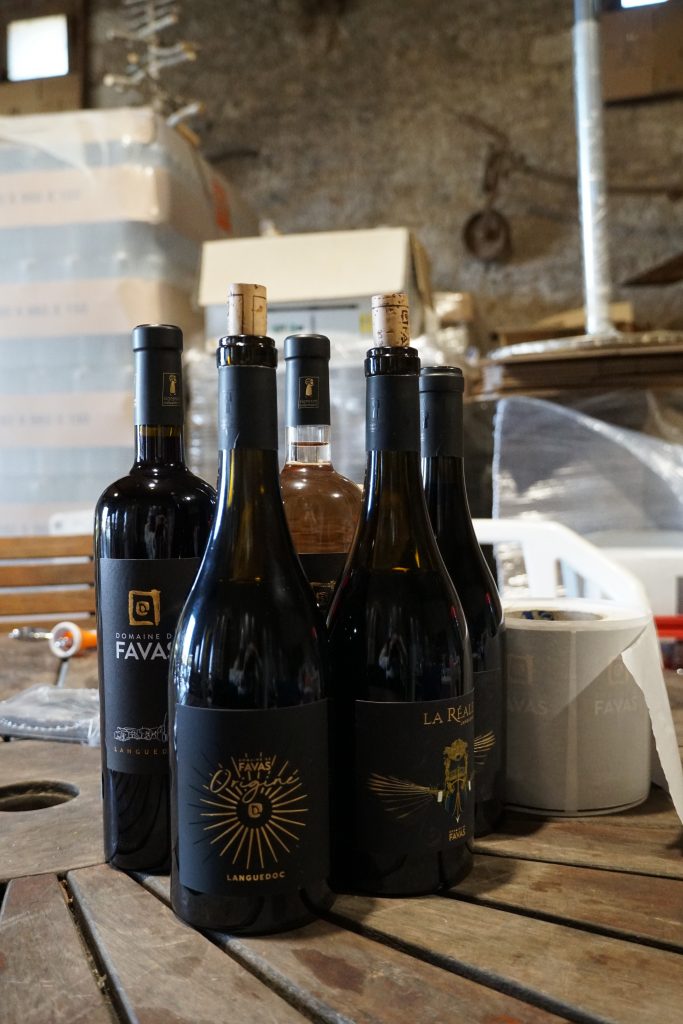 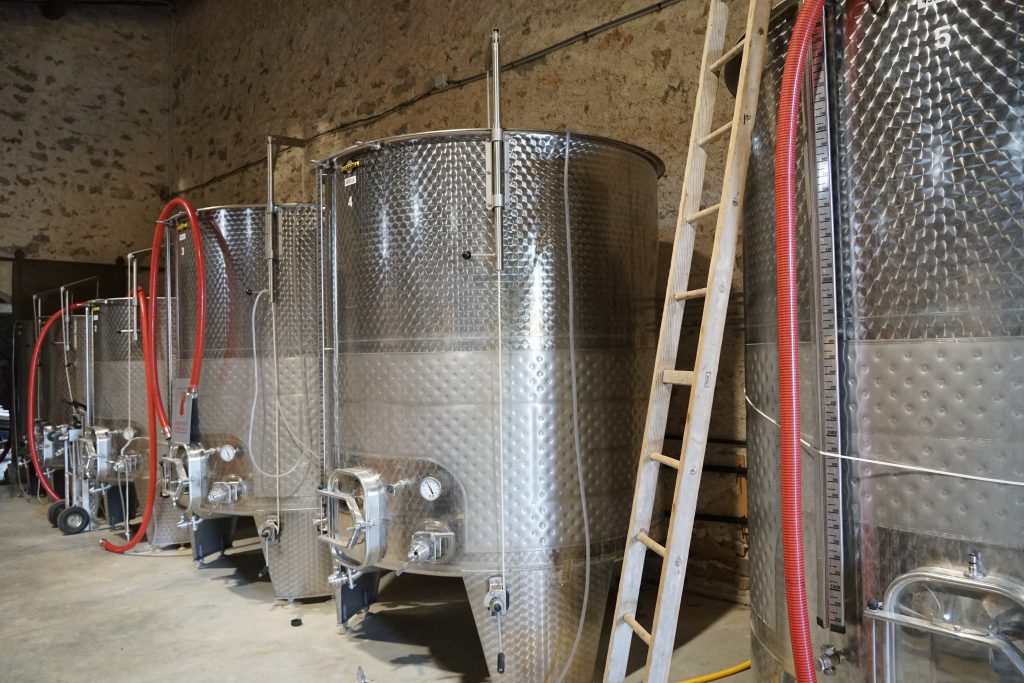 The entire vineyard is cultivated organically. An important role is attributed to shrubs (wild fig and pistachio trees), dry stone walls on the edges of the plots, wetlands and inter-row cover play an important role, as they provide shelter for insect and promote biodiversity. Additionally, the neighbouring farmer’s sheep graze in the vineyard during winter. Samuel’s production was initially reduced by roughly 30% by switching to organic agricultural methods. However, he is recently noticing a slow recovery in production levels. From the 2021 harvest onwards, the wines produced at Domaine de Favas will be certified organic. Samuel’s goal is to evolve into a biodynamic winery while respecting Rudolf Steiner’s formulas. For example, he is considering using horses instead of tractors. Samuel sees an ethical-ecological approach to manage his vineyard as part of a holistic view on agriculture and food.

Basse-cour et Courtois is a biodynamic farm in Vendémian, founded by farmer Vivien Sabot in 2018. In a previous life, Vivien worked in the circus industry. In order to achieve his dream of starting a biodynamic farm, Vivien completed several farming internships and participated in an apprenticeship program. As a young farmer, he obtained a PPP (Plan de Professionnalisation Personnalisé) which enabled him to receive a federal grant. Vivien, who is trained in biodynamics, believes in farming that respects the soil, the plants and the rhythm of the seasons. As such, he envisions a sustainable economic future for the farm, and by extension, our whole society. His long-term objective is to become self-sufficiency by establishing up a seed workshop. 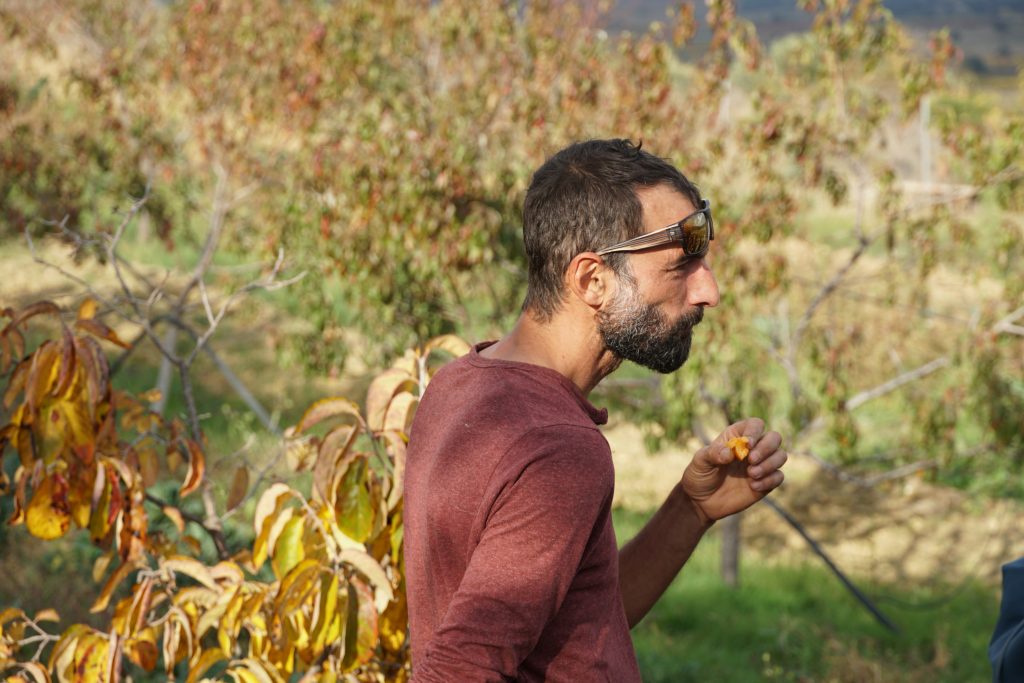 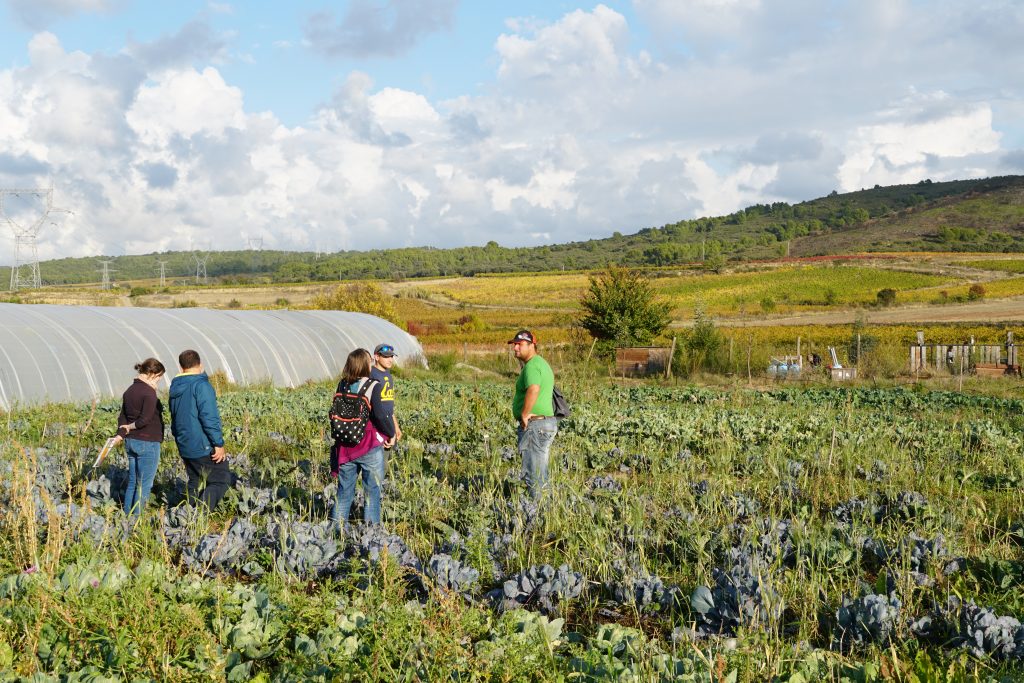 As more than 70 different kinds of vegetables are cultivated, the farm seeks diversity rather than quantity. Using different production methods that respect the principles of agro-ecology, 6000 m2 of market gardening is cultivated in different ways: on hills, in the open field between fruit trees, in greenhouses. Many animals, including chickens, sheep and a dog, live on the farm. They all play a role in the biodynamic agriculture. An orchard was planted in 2009 was revived in 2018, with a lot of ploughing and composting to get it back in shape. In this orchard, Vivien cultivates peach, apple, apricot and persimmon trees. He sells his produce at a local “Boutique Paysannes”, an online organic farmer’s shop, at local farmers markets and at several other organic shops. As organic products are very popular in the farm’s region, the region is often reffered to as “Le Triangle d’or du Bio” (i.e. the golden triangle of ‘organic’). You can read more about Vivien on his website. 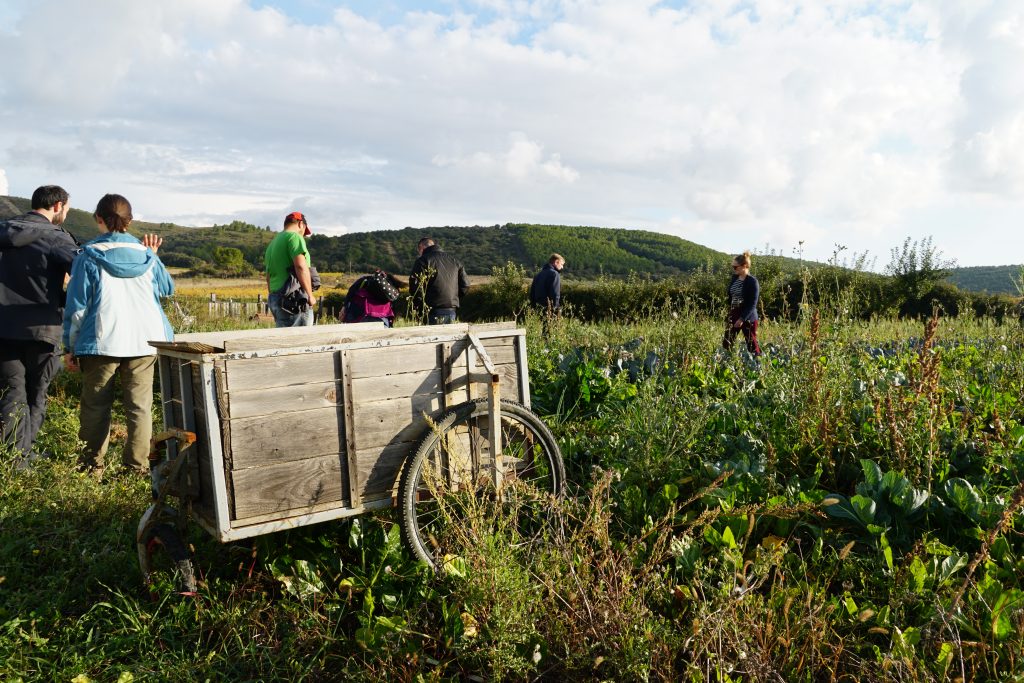 While previous generations grew vines, Sébastien Blayac has recently begun to convert the land of Mas de la Victoire into olive groves, pomegranates fields, lavender and thyme. He cultivates more than a thousand olive trees and aromatic plants on his land. As the land cultivated by Sebastian is part of the Natura 2000 network, natural management is very important to Sébastien. He wants to live in harmony with his environment and to contribute to the balance of ecosystems. He is committed to organic farming and the protection of birds, insects and reptiles. After converting to organic farming in 2018, he received the label “Des terres et des ailes” (“Lands and Wings”) from the ‘Ligue pour la Protection des Oiseaux (LPO)’ – (‘Protection of Birds League’) in September 2020. However, Sébastien also faces several challenges in relation to nature: with droughts becoming more frequent and rainfall more intense, the effects of climate change are clearly felt on his farm. Nevertheless, he is studying agro-ecology to become a better farmer in the future. Sebastien sells his products via L’effect papillon, where he has his own page with more information. 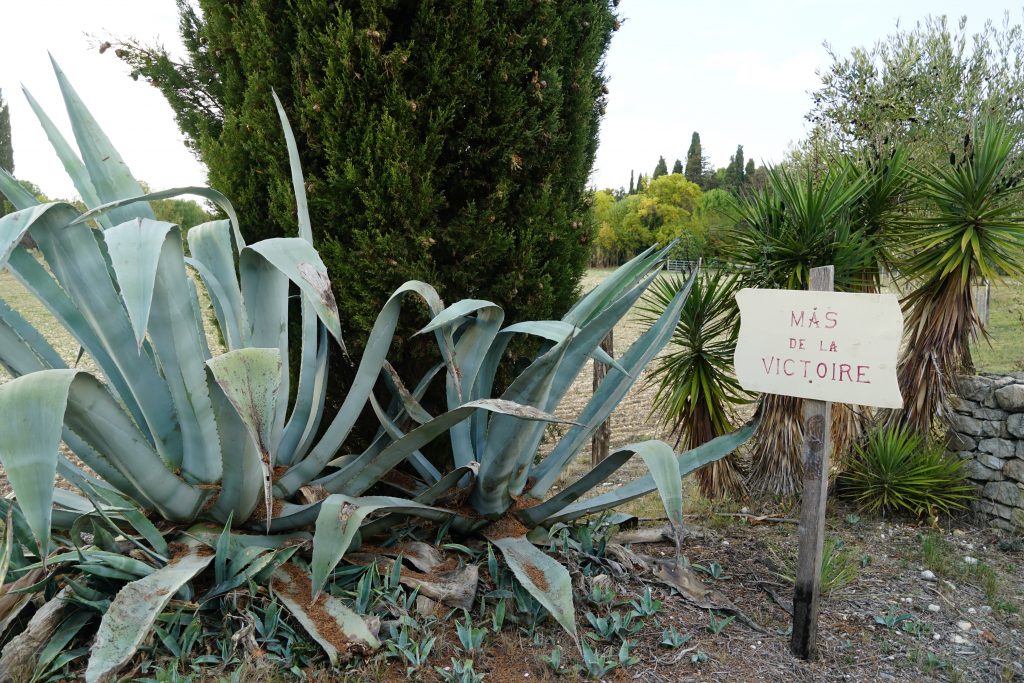 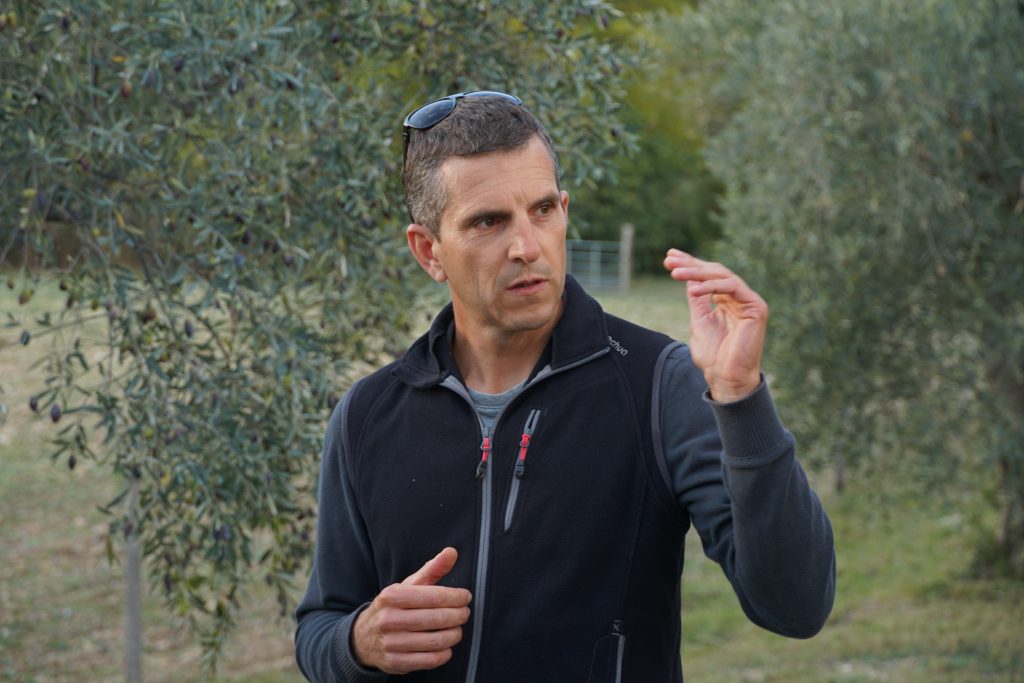 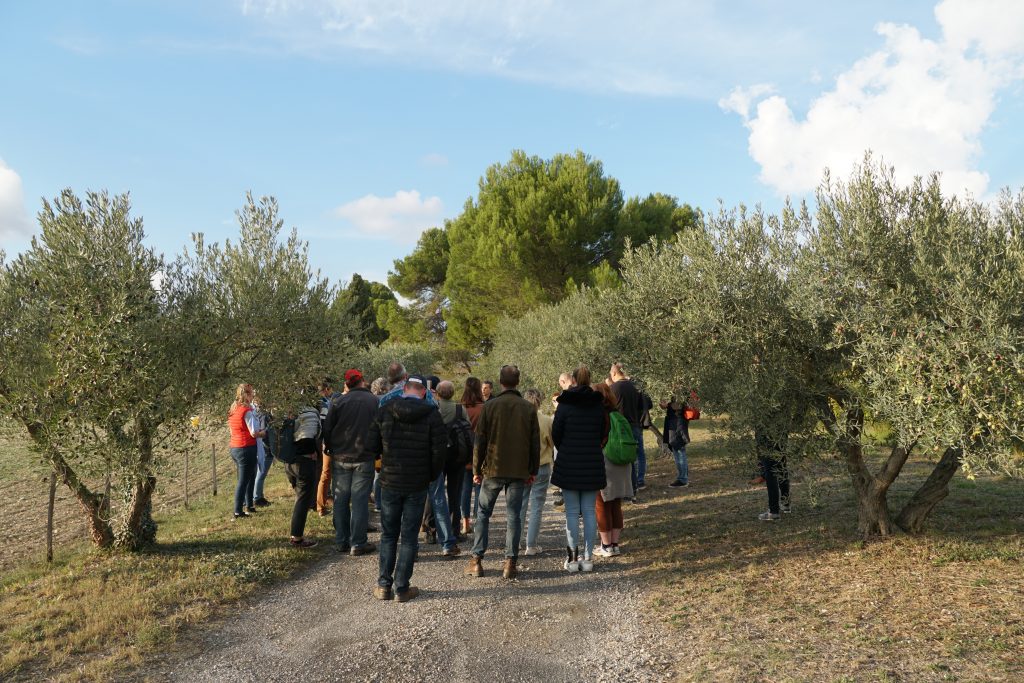 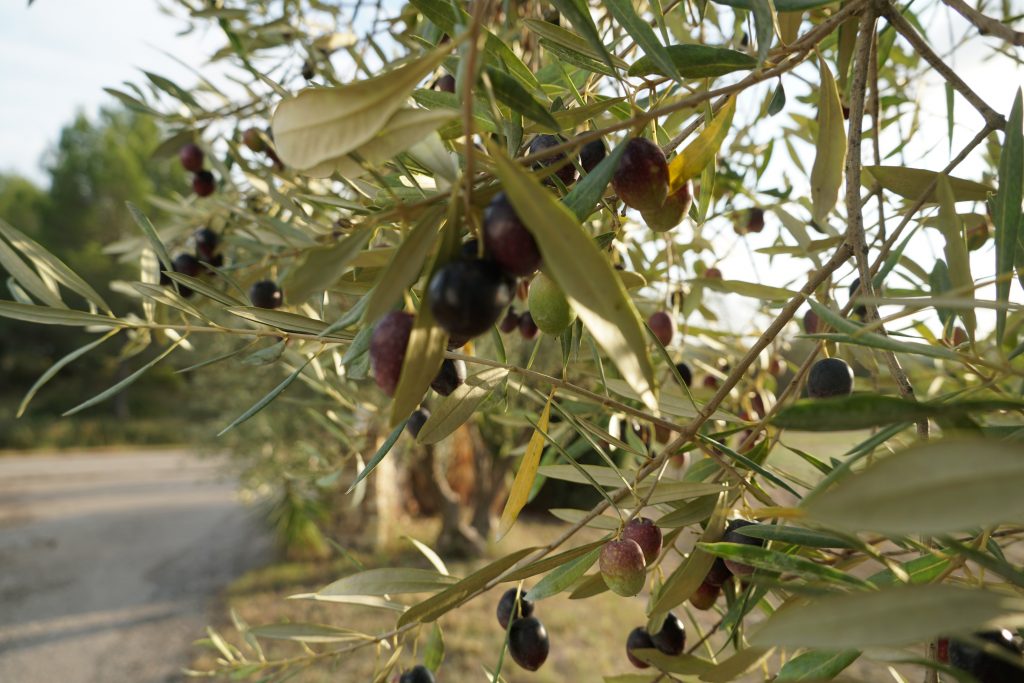 These visits marked the end of the final Newbie meeting. This 3-day meeting full of inspiring stories allowed the newbies to share experiences and ideas while learning about each other’s businesses. It’s safe to say that this was an inspiring and refreshing meeting for all participants.