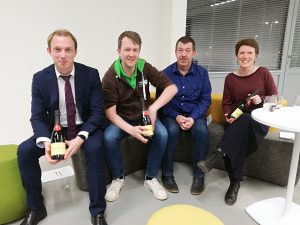 The agricultural sector faces major challenges. The most ‘popular’ challenge concerns sustainability. Yet, sustainability has many dimensions. Is there a future for young farmers in Flanders, and what does this look like? How will markets evolve? What can we expect from the future generations of consumers? These questions were the point of departure for an interesting debate at Agropolis (Kinrooi), a promising agricultural site on the border with the Netherlands. Over 60 people attended the event: numerous young and ‘experienced’ farmers, experts from the financial sector, civil servants from the agricultural department and researchers.

Luc Uytdewilligen opened the evening, with an overview of the key characteristics of agriculture in Flanders. The statistics are well-known across the ‘agricultural community’, including the fact that farmers get bigger, the average age of the Flemish farmer exceeds 50 and the number of farms decreases year after year. But it remains valuable to start a discussion on the future with statistics of today.

A debate on the future of farming in Flanders can obviously go in many directions, such as focusing on access to land to generational renewal and closing the gap between consumers and producers. However, communication became the overarching theme of the debate. This closely relates to current climate actions in Belgium, such as the weekly climate demonstration of youngsters in Brussels. In the current climate debate, farmers are often regarded as a key bottleneck in achieving climate saving ambitions while the efforts of the sector remain a blind spot in the press. Farmers are not journalists and neither are policy makers, researchers and agricultural advisors. Yet, all stakeholders need to bundle forces in terms of clear and evidence-based information.

Furthermore, farmers – both the young farmer and the actively participating farmers in the audience – clearly recognize that they operate in a global environment with international trade being the reality. Yet, regulation differs not just between Europe and its trading partners, but also within Europe. Many farmers experience the high national standards as an unfair trading practice. As formulated by a dairy farmer: “Why do we have such high standards for our own producers, but do we close our eyes for the practices in other member states? We urgently need more Europe!”.